Interview: Jerry James of the Foxymorons 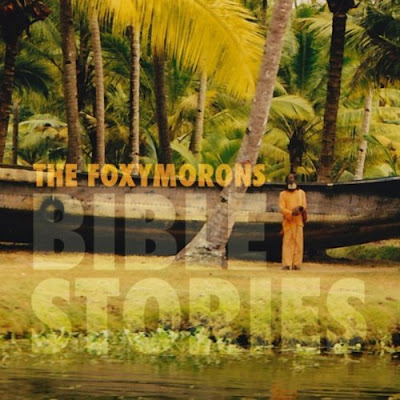 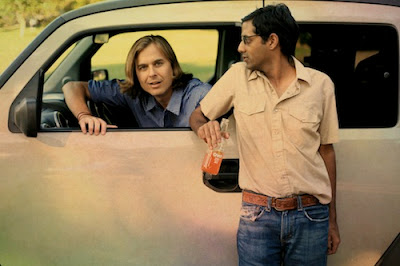 Going on over a decade as a band, the Foxymorons are set to release their fourth long player next Tuesday. Their last record got positive reviews from All Music and Pitchfork and regular play on Morning Becomes Eclectic. The new record's already getting tons of spins on KEXP (song of the day) and gotten a video premiere on Pop Matters.

You Set the Scene: What's going on in Ft. Worth?
Jerry James: Man, every morning the weatherperson on the radio tells me it's going to be 105 with a heat index of 110. I'm over the summer. It's mostly movie theaters and frozen yogurt for me until the fall.

YSTS: We’ve had an incredibly mild summer; it’s just finally starting to heat up. People are predicting an Indian summer. First off, love the album cover - where'd the photo come from?
JJ: Thanks! I took it while on a houseboat in Kerala, India about ten years ago. Somehow it seemed to be right for the cover.

YSTS: Tell me how you got started playing music.
JJ: I had always felt too uncool for rock. In middle school, the older tough dudes in my shop class were into rock and I felt like I’d get laughed out of the room if I tried to engrave the name of a rock band into a class project. It was all hair metal or whatever, but still. So that left me with Top 40. But eventually, I remember my dad handing me a twenty and asking me to take his car to the gas station for a fill-up. I saw a copy of Rolling Stone with Nirvana on the cover at the gas station and used the change to buy it. Dad wasn’t happy. Anyhow that sparked an interest in Nirvana and eventually I found myself at the used CD bins buying Dinosaur Jr, Pavement, and Gram Parsons albums. It happened really quickly - from Boyz II Men to Pavement in the span of 18 months. How did it happen? Somehow the ethos of punk rock and indie rock made it seem possible to make up songs. I felt like I was sneaking in through the back door.

YSTS: Were your parents really strict and did they immigrate from India or were they born here?
JJ: My parents immigrated to the US from India in the early 70’s. Oh yeah, they were pretty strict by American standards but it could’ve been worse. Some of my Indian friends had super-strict parents. I used to attribute my parents’ weird idiosyncrasies to being Indian but I’ve come to realize that everyone’s parents are weird.

YSTS: So, when did you finally pick an instrument?
JJ: Around that time, I picked up a crummy acoustic guitar, which is still the primary guitar I used to write songs. My band mate David showed me a few chords and pretty soon I was trying to make up songs. Every time I’ve thought about upgrading from the cheap-o guitar, David’s like “don’t bother.” I’m not sure what he means by that.

YSTS: Your band mate, David, lives in Nashville. Tell me a little bit about how the writing/recording process takes place.
JJ: We like each other in small doses - I'm being facetious here, sort of - so it works out to make music long-distance. We used to mail each other 4-track tapes or I'd find a song strummed into my voicemail at work. Lately I’ve been sending him songs I record into the voice memo function of my phone. At some point, we'd work out the arrangements, try to muck up the other person's songs, and record it cheap and fast at a studio in Nashville or Dallas. This last record was recorded at David’s house in Nashville.

YSTS: LA seems to play a big part in the lyrics on this record, both in the songs David sings and the songs you sing. Do some of these songs date back to when you were living here? Or do you just get musically inspired by the idea of Los Angeles?
JJ: We’re both kind of fascinated with the idea of California. In fact, he’s somewhere out there right now on a solo trip in a rented car driving around soaking up beach vibes. I think living in Los Angeles subconsciously influenced the record: the old Largo, browsing at Skylight books, Sunday afternoons at Amoeba, almost getting hit by a pool cue at Little Joy…I miss it.

YSTS: Why five years between records? What have you been up to?
JJ: We never intended to take that long. David transitioned to a freelance day job and did a lot of international traveling. Plus, our creative energies were directed to a new project, a clothing line that we started, so we put our songs on the backburner. I’m hoping the next record comes out much faster.

YSTS: Is there much of a scene in Ft. Worth? Or does most of the action take place in Dallas and Denton?
JJ: A friend made me a mix of primarily Fort Worth bands that seemed pretty cool although I’m not really too knowledgeable about the scene. People here seem to talk about Telegraph Canyon a lot though.

YSTS: Who are some of the local bands you're into?
JJ: Around North Texas, people talk about Telegraph Canyon or Sarah Jaffe, although I don't keep up too well. I'm sure there are lots of smaller, exciting bands but I’m not sure.

YSTS: What about Centro-matic and all the Will Johnson/Matt Pence projects?
JJ: Oh yeah, don’t get me started. Not only do they make great records and play awesome live shows, but they’re really nice people as well. Will was super-encouraging when we were making 4-track recordings around ‘97/’98. He also sat in on drums on an earlier record, Rodeo City. And we’ve been collaborating with Matt Pence in some capacity for a few records now.

YSTS: Any local blogs or music publications that you can share with my readers?
JJ: We Shot JR is a blog with a distinctive voice and a pretty well-informed underground/independent sensibility, although I’d advise you not to read the comments.

YSTS: I know you’re a breakfast freak. What’s your favorite local breakfast spot?
JJ: There’s a place called Paris Coffee Shop that’s been around since the 1920’s. It’s got a really comfortable, friendly vibe and the food is delicious. My favorites in the morning are the pancakes and biscuits. The pies are also awesome. There’s usually a line of regular ol’ timers but it’s worth the wait. I’d also recommend the Montgomery Street Café which is really tiny so I usually sit at the counter. It’s got pictures of Annie Oakley and Wyatt Earp on the walls and breakfast is inexpensive and good.

YSTS: And any favorites from your time in LA?
JJ: Oh man, Los Angeles has some great breakfast places but my favorite is The Griddle on Sunset. Hands down. I feel like everything they serve is as good as it gets. I lived within walking distance of it at one time, but convenience has little to do why it’s my favorite. I recommend just buying a single pancake, though, because they’re huge. The plates of left-over pancakes that I’d see get taken back to the kitchen could feed a family for weeks.

YSTS: Best barbecue spot?
JJ: There’s a family-run place called Angelo’s near where I live. It’s been around forever and I always see the same guys behind the counter and the same woman at the register. It looks like it’s right out of the 60’s. Lots of dudes in cowboy hats and boots and the beers are served in giant frozen schooners. People rave about the brisket but I get the ribs. Oh yeah, I should mention all the massive “hunting trophies”, i.e. taxidermy on the walls.

YSTS: Best burger?
JJ: I was just at Kincaid’s a few days ago. Awesome burgers and milkshakes and the meat is cut and ground in the store daily. It’s another place that’s been at its location for decades. Its claim to fame is that it served thousands of burgers in a single day after it was voted the best burger in the country by some publication. But the thing that makes it for me is that no matter how long it’s been since I’ve been in, the smiling lady at the counter, Lynette, always greets me by name. How do you like that?!

YSTS: How’s it compare to your beloved In-N-Out?
JJ: Ha! Don’t put me in that position. I love them both. The rumor is that one’s about to open in Garland, near Dallas. I bet it’ll be mobbed all the time, though.

YSTS: Best tex-mex?
JJ: This is a tough one. I always take people to a place called Joe T Garcia’s near the stockyards. People argue the merits of the food – although, for the record I think the fajitas are great – but what’s not up for debate is the amazing vast outdoor patio, which is actually more like a massive garden with a decorative swimming pool, fountains, and connecting courtyards. Somehow I feel like I’m vacation in California when I’m there. I heard a rumor that Fleetwood Mac would fly out to Texas just for a meal there. I don’t know if that true, but it’s a good story.

YSTS: Favorite thing about living in Ft. Worth?
JJ: People are totally friendly and I live near the FW Modern which is a fantastic museum.

YSTS: Your favorite book?
JJ: I’m glad you didn’t say novel. I’ll pick Franny and Zooey. Short stories are my favorite format and these are both good. I was just at the doctor’s office and saw Jonathan Franzen on the cover of Time. I’ll probably pick up his new book, although I never got around to The Corrections.

YSTS: The Corrections is great. One of my cousin’s a book scout and she was right when she said every Midwestern son should read it. Favorite film about Texas?
JJ: Patricia Neal just died so I’ve been thinking about Hud lately. She’s so good in it and Paul Newman plays such a great and despicable character. I really love that movie. I know Dazed and Confused was filmed in Austin, but does it count as a Texas movie? I don’t know, it makes me think of Texas.

YSTS: Two great choices. And yes, I’d definitely consider Dazed and Confused a Texas film. Favorite film about LA or set in LA?
JJ: I’d like to think of something less obvious, but Swingers is such a Los Angeles movie to me. I always liked driving past the Los Feliz 9-hole golf course because of it.

YSTS: Yeah, that came out right around the time I originally moved to LA. I remember the only guy I knew dragging me around to all the spots, The Dresden, 3 of Clubs, Derby. Any must see TV?
JJ: I probably can’t suggest anything most people don’t already know about. Mad Men and Curb Your Enthusiasm are about it for me these days. I watch almost no television, unless it’s on Netflix. I’ve added Breaking Bad to the Netflix queue.

YSTS: Interesting. I think I’d pick different records from the last three. Last question - any plans for a tour this time around? How about another LA show [they played Spaceland and Sea Level when their last album came out]?
JJ: Nothing planned yet. We’d love to tour. I’m glad we got to play Los Angeles at the time of our last album and I’d be thrilled if we could make it happen again.

YSTS: Thanks for the time.

MP3: Out of Control

By going to Car Rental 8 you can discover affordable car rentals from over 50000 locations globally.