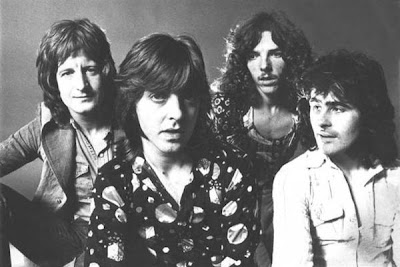 Here’s my weekly reminder to listen to Sinking with Sylvia (and Sometimes Todd) on Little Radio tomorrow from 11:00 AM to 1:00 PM. Tomorrow they don’t have a guest, but they do have a theme – the 7” show.

Each week I give you a reminder to listen and also write about one of my weekly selections on the show. On 12/13 they did their best of 2007 and my pick was Okkervil River. I’ve already written enough about them, so I’m going to skip that. They were on vacation until 1/10/08, but I was preoccupied with family matters and didn’t make a pick that week, which brings us to the show on my birthday, January 17th. My pick that day was Badinger’s “Baby Blue.”

When I was growing up I didn’t know the difference between Badfinger and Bad Company. I didn’t get into the band until a good friend of mine played those long lost Pete Ham solo records for me in the late 90s. It was an odd entry point to the band, but better late than never. I pretty quickly tracked down Magic Christian Music, No Dice, Straight Up and Ass. I’ve been listening to them a lot lately because for Christmas my girlfriend tracked down the out of print biography of the band, Without You – The Tragic Story of Badfinger by Dan Matovina. The excellent VH-1 Behind the Music on the band (which they don’t air anymore) had piqued my interest.

As the title of the biography suggests, Badfinger’s story is one of the most tragic in rock history. The band members were the victims of disorganized labels (Apple), naive personal managers (Bill Collins) and extremely unscrupulous business managers (Stan Polley) and bad girlfriends/wives. The band never developed a strong enough identity for themselves. After signing to Apple and having a hit with McCartney’s “Come and Get It” they couldn’t shake the Beatles comparisons. Then Harry Nilsson had a #1 hit with their song, “Without You.” Management is stealing from them, lawsuits abound and a new record deal with Warner Bros. led to ridiculous pressure. For a sensitive guy like Pete Ham, it was just too much and he hanged himself in 1975. His best friend and band mate Tom Evans followed eight years later. The book is well researched and thorough and a really interesting read for fans (although it's a hefty read).

Fortunately for us, Ham and the rest of Badfinger left behind a strong catalog of songs. Capitol put out an excellent introduction to the band called, The Very Best of Badfinger which is a great introduction to the band. I tend to prefer to the Pete Ham songs, but Tom Evans wrote a few gems too. Ham’s “Baby Blue” is probably my favorite Badfinger track. I was re-watching Scorsese’s The Departed the other day and noticed its inclusion. I really like those Ham post-humous released too. “Catherine Cares” kicks off 7 Park Avenue and gives you insight into the kind of guy Ham probably was. It’s such a sweet song about his mom. “Just Look Inside the Cover” is another standout about outward appearances and racism.

great stuff, duke. that comp you mentioned is the only 'finger collection I have. hollar at me if i'm missing out on 'essential' album cuts.

i've been on a badfinger binge as of late...you have fantastic taste mr. duke

"baby blue" is the right choice every time in my mind. I probably have listened to this song about 50 times in the last year, which the specific intention of listening to this song.